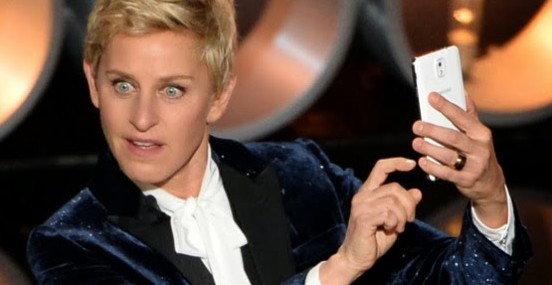 What did the Oscars 2014 and Ellen have in common?

If you watched the Oscars 2014 Sunday night, you might have noticed a big drift from the traditional Oscars to the one that aired on Sunday. Being a pro-tech platform, we believe in bringing the best technological news floating over the internet and Sunday night it was all about the Oscars. So what did the Oscars and Ellen Degeneres at Oscars 2014 have in common? Technology. The Oscars 2014 was a perfect event showcasing all the technological advancements today, and I am not referring to just the stage décor.

Ellen Degeneres at Oscars 2014 staged a perfect use of technology with her Samsung phone and the habitual usage of twitter at different intervals of the show. There was ample of “selfies” taken by different celebrities and they were duly posted online for the internet audience, Ellen being the highlight of it all.

The Oscars took technology to another level by breaking a couple of online records as well. According to Deadline, Ellen’s celebrity selfie with Bradley Cooper, Jennifer Lawrence, Brad Pitt, Julia Roberts and couple others, broke President Obama’s Twitter records for online retweets in under an hour. Statistics show that the selfie was retweeted over 1 million times and attracted 720,000 favorites on the micro-blogging website in the hour it was posted. Sources have also confirmed that Twitter had crashed for some time as well after Ellen started to tweet during the event.

Ellen takes a selfie with celebrities at the Oscars 2014

One twitter user, Mark Gurman tweeted some sarcasm for Ellen Degeneres at Oscars 2014. Apparently she was trying to promote the Samsung phone at the Oscars with all the staged tweets and selfies. According to Mashable, minutes after using the Samsung on-stage, Ellen tweets a picture of her and Channing Tatum from her iphone (screenshot) which Mark instantly re-tweets. Ellen attracted more criticism, but this time from a pizza company called DiGiorno, after she invited celebrities to have pizza with her in the middle of the show. The pizza company tweeted, “@TheEllenShow R U SRS? #Oscars”. Ellen later on did live up to her promise and got some pizza for the hungry guests.

Viewers embraced the technological change that was presented at the Oscars last night but some Oscar fanatics missed the original format of the show where previous hosts led the Oscars in an elegant manner and focused on the awards more than tweets and the selfies.