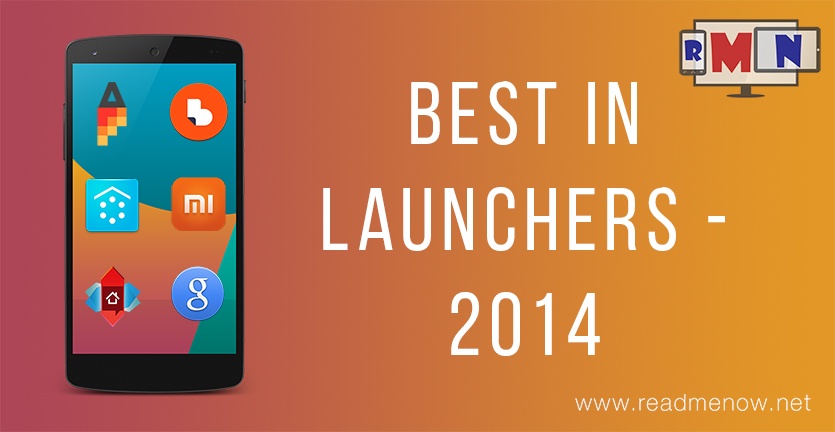 We’re almost towards the end of 2014. This year has been great as far as Android customizability is concerned. Amidst the plethora of innumerable apps on the Play store, more than a few great apps have been released that have proved their mettle in their respective grounds.

Undoubtedly, home screen is one of those places most frequently visited by the user, and thanks to the open source nature of Android, it is possible to customize every bit of it. There are plenty of third party launchers suiting different needs and perspectives. Ofcourse, the list of the best can be unending.Based on reviews and download counts from Play Store, here we have our list of the best in home screen replacements in 2014.

(Kindly note : The list involves ranking on the basis of number of downloads and reviews, and not compulsorily those released in 2014. Also, a few of the features mentioned for each app might require paid versions of the app to unlock.But do try those, they’re worth it :P)

Undoubtedly the most favorite among the android fanboys under third party launchers. Nova has been providing a close to stock experience along with tons of customizability features without compromising it’s core functionality. We have options for full customization in Desktop, Drawer, and Dock. For example, you can set a separate background for your dock, as well as changing icons for each app. There are tons of other launcher packs available on the Play Store for the same. The advent of ‘Ok Google’ was loved by all. Moreover, you can also import looks and feel of your previous launcher. This includes all your widgets, app icons, folders, wallpaper, etc. We also have individual home screen gestures available in the Prime version. Unread badges for all your social apps, Hide apps functionality, additional scroll effects on homescreen and drawer, icon size can be unlocked with the Prime version. This app tops our list in the list of best launchers, and the Prime version is worth every penny.

The official launcher by Google is a personal favourite and makes it in the list owing to its simplicity. It may not offer lots of customization options. However it’s rock solid, and is hence chosen as the base for other ports. (Take Trebuchet by Cyanogenmod as an instance). It comes pre-installed in all stock vanilla android phones. Also it has compatibility with 4.2.x devices. The main striking feature that makes it a choice for homescreen is the quick access to renowned Google Now. Either by the hotword activation or with a single swipe towards the right, Google Now is never too far. And with the latest update, it got polished with Material Design. Thus, it looks and works even better.

Action Launcher hits upfront in the list of best launchers, when it comes to uniqueness in design. It has been around since December 2012, and has now grown into a full-fledged feature packed home. What makes it unique? Well, it’s sliding drawer isn’t like any others out there. One swipe from left takes you there, and you can find an alphabetical list of all your apps. It also has widgets in the same pane. The homescreen can be customized with apps and widgets. Similarly, we have Quickpage in which we can put our favourite apps and widgets, again a single swipe away. What’s more interesting is the inception of ‘shutters’. Shutters link each app with a related widget, that can be accessed with a vertical swipe over the app icon.If that’s not enough, Pro version adds more remarkable options including icon packs, icon scale, hide apps, shutters in folders, Quickdrawer and Quickpage backgrounds, read/unread notifications, etc.

Aviate was an initiative by Yahoo to redesign the concept of a personal homescreen. It was initially released as an alpha in mid 2013 with an ‘invite based’ download access. Since then the app has grown leaps and bounds. The basic idea of this particular launcher is arrangement of apps into grids. This makes perfect sense, and one is more than happy to see their apps automatically categorized by collection which can be customized as per will. It also suggests apps pertaining to that collection. Beyond that, the home screen is incredibly helpful. It relies on a sort of profile system which allows Aviate to give you access to relevant apps and information. These profiles (including Time, Home, Listening, Work, Nearby) can be selected manually from a slide-out menu, but they will also activate automatically based on your location or movement. The Time profile, for instance, switches from “Morning Routine” to a normal daytime profile to “Night Time” as the day progresses. We don’t get lot of customization here, apart from theme options including Light, Dark and Transparent themes. We also have a choice of applying those fancy icon packs available on the Play Store.

When it comes to theming and customization, Buzz Launcher has a much sheer scope than any other launchers out there. What sets this one apart, is the ability to completely revamp the homecsreen using homepacks. Each homepack (the equivalent of themes) offers a new design for the face of your phone. As they’re based on static layouts, each is radically different from others. However, you might face a prescriptive issue. For an instance if a homepack has a link for Dropbox or say any app you don’t have installed, you can’ get rid of it. However, there are tons of homepacks available to chose from. The way Buzz Launcher works does mean you need to spend a while trying out different homepacks, though. It’s not a one-size-fits-all kind of solution. You really need to find a homepack you love to make Buzz Launcher worthwhile. This makes Buzz unique in its own scope and thus bags it’s respectful position among the best launchers in 2014.

Smart Launcher isn’t alone when it comes to minimal homescreen replacements, but has indeed made itself into one that promises speed and fluidity at it’s best, without compromising performance. On the home screen,we are greeted with a circle of apps arranged based on our preference and daily usage. However, we cannot arrange the order of apps here. Instead it offers a sleek app drawer that organizes apps into six categories: Communication, Internet, Games, Media, Utility, and System. This just makes perfect sense. Moreover,if an app was wrongly placed, you can always move it to it’s correct category. Apart from the pre-installed theme, we have access to hundreds of others, following the same routine. Other nifty features include hiding apps, icon packs, gestures, Live wallpaper support, widgets, etc. What makes this launcher unique? Well, not many apps can offer minimalism without many features getting stripped away, making it much more than your usual launcher.

Other launchers that show equal potential in near future include Themer, Go launcher, Apex, MI launcher and like wise.Frankly speaking, the list can never be complete. It’s quite obvious that the opinions may differ, considering the prefernce(s) kept in mind.

What are your thoughts on the above list? Did you find your favorite(s) placed here? Do let us know your thoughts in the comments section below.