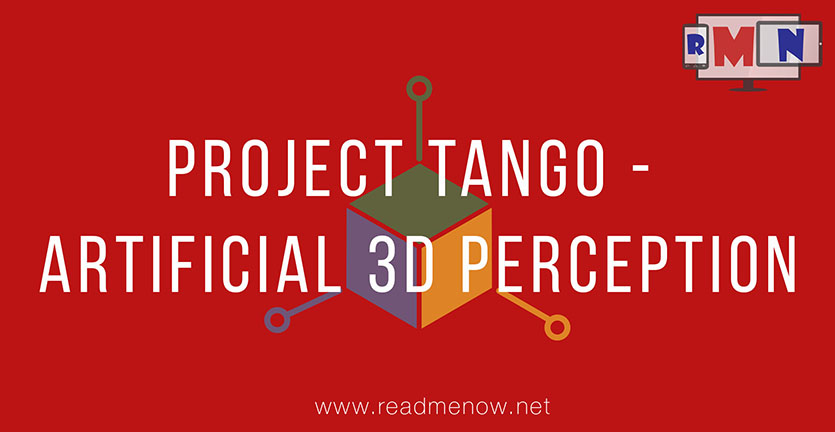 As we walk through our daily lives, we use visual cues to navigate and understand the world around us. We observe the size and shape of the world around us and learn the position and layout of the surrounding. This awareness of space and motion is basis by which we interact with our environment and each other. We are physical beings that live in a 3D world. Yet, our mobile devices assume that the world ends at the boundaries of the screen.

Google isn’t satisfied with the mobile devices just taking a 2D picture or video. Neither do they want the mobile to take just a stereoscopic 3D picture. It isn’t about creating a touch screen app. Google wants it to be BIG. They want to give the mobile device a human scale understanding of space and motion so that the device can perceive and understand the world around as we do.

Project Tango is one such device equipped with powerful software and hardware that can track the full 3D motion with the device, while simultaneously creating a 3D map of the environment.

But what is the use of such a technology? Simple, you can easily map your home and furniture just by walking around and when you go to buy a new furniture for your house, you don’t need to actually take all those measurements. Or next time you go to a new place, you can actually pinpoint the exact location and track down the building where it is, the floor on which it is and even the room. Or if you go to a new place but forgot the way back, no worries it is right in your hands. Or you can play amazing augmented reality games. This technology may also be helpful for visually impaired in getting around.

Project Tango will provide a brand new platform for the developers. By giving applications a human-like understanding of space and motion, developers will be able to create applications that weren’t earlier possible. Google hopes that it can unlock new kinds of smart, vision-based applications based on the 3D sensing and vision technology that it has built into the phone.

Who is behind Project Tango?

Inside Google, Project Tango is the work of the Advanced Technology and Projects group (ATAP) – which was formerly part of Motorola. That in turn is headed up by Johnny Chung Lee.

How does it work?

Google is using Movidius’ Myriad 1 vision processor platform for Project Tango. Previously, embedding these kinds of sensors into phones was not only expensive but also consumed a huge amount of battery. The latest generation of vision processors, however, uses significantly less power, which was likely a reason why Google was able to go ahead with this project.

The Myriad 1 is basically a chip that allows the phone to do things like motion detection and tracking, depth mapping, recording and interpreting spatial and motion data.

These sensors will allow the device to make over a quarter million 3D measurements every second, updating its position and orientation in real-time, combining that data into a single 3D model of the space around. It tracks your positions as you go around the world and also make a map of that.

Google’s been working on something similar to Project Tango for a while now, but on a much bigger scale than smartphone processors. The self-driving cars from Google work almost similarly allowing it to see everything that’s happening around them, building on-the-fly topographical maps to avoid collisions and potholes.

The Concept of Project Tango as explained by ATAP-

The Project Tango tablet has a 7.02” 1920×1200 HD IPS display (323 ppi). It has a 1MP front facing camera with IR LED and a 4 MP 2µm Pixel Camera at the back. It is accompanied by a Motion Tracking Camera and an Integrated Depth Sensor at the back. The tablet is powered by NVIDIA® Tegra® K1 Mobile Processor. The device runs on Android 4.4.2 KitKat. It has 4GB of RAM and an internal storage of 128 GB. It has a micro SD card slot and a nano sim card slot. This tablet is priced at $1024.

Here is a play store link for the Project Tango Tablet.

To Learn more about Project Tango visit the official webpage.

Let us know your thoughts and views about this project in the comments section below. Keep following for latest updates and reviews on such projects.

I am an ordinary guy with interest in Computers and Technology. I work as a freelancer in Read Me Now. I did my schooling from Akola, a small city in Maharashtra, India. I am pursuing B.E. Computer Engineering from K.J. Somaiya College of Engineering, Mumbai. My area of interest is basically Android and Android based technology.