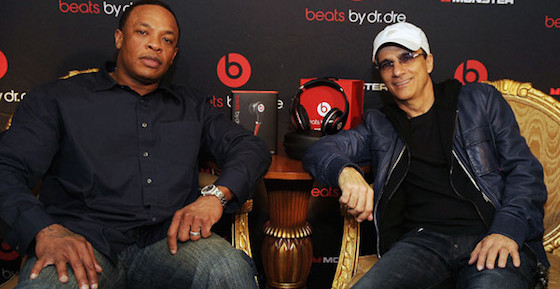 It has apparently been confirmed by Dr. Dre that he has sold Beats by Dre to Apple for an estimated $3.2 billion, a deal which will make Dr. Dre the first billionaire of the hip-hop industry. The 49 year-old rapper from Compton, California, and his business partner Jimmy Iovine are reportedly going to take senior positions at Apple, although their roles remain undefined till the filing of this report. The rumors are that Apple’s CEO Tim Cook will be Dr. Dre’s only boss.

A lot of musicians and celebrities have congratulated Dr. Dre and his team through various forums and social networking websites. Beats by Dre have been a widely followed product in the audio industry and has a huge fan-following.

In the following video, which features Dr. Dre along with fellow rapper and friend Tyrese Gibson, the pair refer to the ‘billionaire boys club’ and how the deal would make an addition to Forbes’ list of billionaires:

Dr. Dre’s company controls around 27 percent of the estimated $ 4 billion headphone market and around 57 percent of the market for premium versions. It also has commercial partnerships with Chrysler, Hewlett Packard and HTC which help broaden its consumer base.

Since Apple is not a company renowned for buying the success of others, the acquisition of Beats by Dre reflects a major policy change for the company, although it is hardly surprising given the fact that sales of headphones and other accessories such as Bluetooth speakers have risen since the advent of the iPod and then the iPhone.

Beats have proven their expertise when it comes to designing wearable technology, and will prove to be very helpful for Apple in designing products in the future, such as the long awaited iWatch.

Watch the Video Here of beats by Dre by clicking on the link!