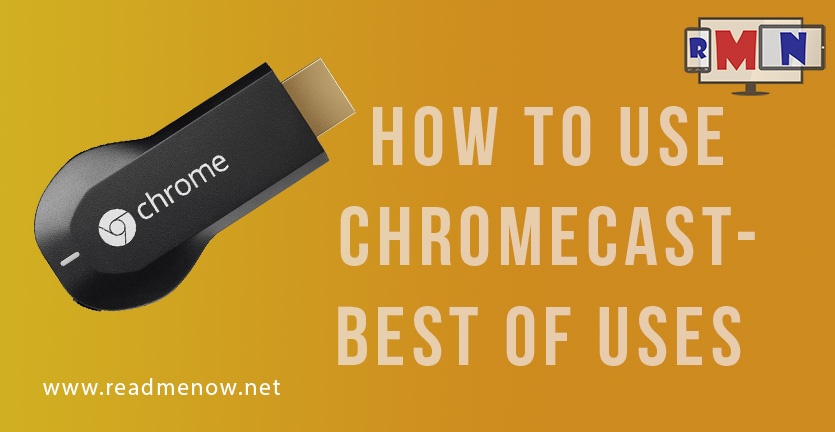 How to use Chromecast – Best of uses

After the release of Google Chromecast, it has brought about a revolution in streaming media content. Chromecast is basically a small dongle which acts as a gateway for streaming our content on a secondary display. It is plugged into your TV’s HDMI port and connects to your WiFi network avoiding all the mess from wires.

Let’s see some of the best way to use chromecast.

One of the best ways you can use chromecast is streaming videos from Netflix. It provides on-demand Internet streaming media including your favorite TV shows and films. The Netflix app is available for both iOS and android and they work seamlessly with the Chromecast. You don’t need any super expensive device or a smart TV for streaming Netflix content. Chromecast is all you need.

Don’t own a Smart TV? Can’t stream YouTube videos on your TV? No worries, Chromecast is the solution. YouTube is yet another application supported by the Chromecast. No hustle-bustle of connecting any wires from any device to watch YouTube videos on a big TV screen. You can now stream all your favorite YouTube channels and cast them over your TV on the press of just one button from your android device.

Chromecast already supports quite a few services including Netflix, Hulu, HBO GO and many more. But why stop the entertainment. You can watch all the browser content over your TV using your Google Chrome browser. You just need to add the Google Cast extension on your Chrome browser. You can even choose a single tab to stream content from and continue to work over other tabs.

You can easily cast music from your Android device over your television. You can do so using the google play music app. You just need to tap on the cast button from your device and select your Chromecast and you are done. You can now play all the songs, albums or playlist you want to play. With Chromecast you can adjust volume, adjust playback. You can even switch to another app on your device while the music is being played on you TV.

If you are video conferencing with your friends and family, instead of just gathering around your PC you can watch them over your TV. Just cast your desktop over the television. If you are conferencing over laptop, you just need to keep it in front of the TV, so whom you are talking too can watch you too. Even better, you can use a portable webcam and keep it above the TV screen. Video Conferencing over TV wasn’t any easy before.

Chromecast now supports tons of apps. You can watch TV shows, movies, play games, hear to some music or watch some online videos. It is very simple. Just look out for the cast button and enjoy the content from your device over TV. Check out the list of supported apps by Chromecast.

Read more about this streaming wonder – chromecast. Feel free to drop your ideas on any more ways you can use chromecast in the comments section below. For more updated on Chromecast and other such amazing devices, subscribe to ReadMeNow.

I am an ordinary guy with interest in Computers and Technology. I work as a freelancer in Read Me Now. I did my schooling from Akola, a small city in Maharashtra, India. I am pursuing B.E. Computer Engineering from K.J. Somaiya College of Engineering, Mumbai. My area of interest is basically Android and Android based technology.