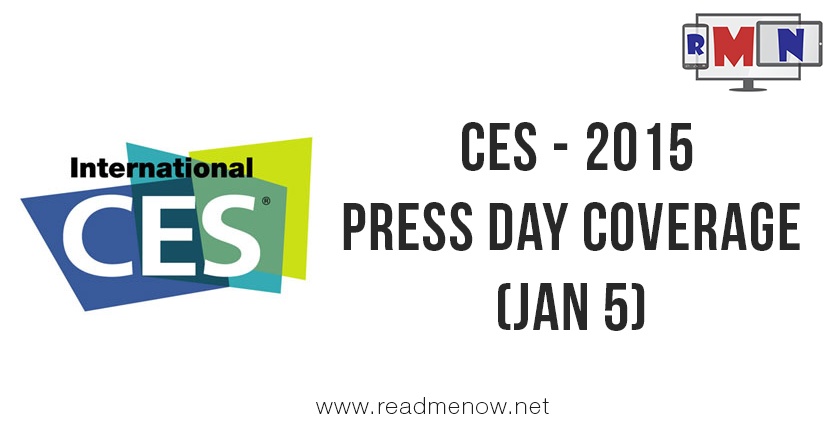 CES 2015 is here and tech giants are playing it big. Historically, the Consumer Electronics Show was meant for TV brands to show off its future products. However, CES, with expanded horizons is now housing release notices for a variety of products. Scheduled from Jan 6 to Jan 9 this year, Las Vegas heat is brimming with new announcements in a range of existing products as well as new entries that aim to rule the tech share this year. (For more info on schedules and events, follow the link : Full Schedule – 2015 International CES, January 6-9)

Let’s take a look what happened at the press day, this Jan 5, preceding the final showdown.

Likes of Samsung, Sony,HTC, LG etc held their dedicated conferences to make a few major announcements. Here’s what we are expecting from these OEMs for this year. All of this, preceding the final showdown.

This South Korean firm bags the headlines every year at CES, and this year is no different, as it seems. We might have speculated the release of ever-happening Galaxy S6, with it’s gimmicky new features. But, Alas! That didn’t happen, as of yet. However, the firm did make major announcements in it’s entertainment sector with the announcement of nine new 4K SUHD curved television sets. These promise better colours and viewing pleasure with minimal power consumption. The new tellies will run the open source Tizen platform, which is “faster and easier to use,” according to Samsung. Also released was the Milk VR, Samsung’s new debut on virtual reality platform, competing with our beloved Oculus rift. Good going, Samsung.

LG is no slouch when it comes to major announcements at CES. As speculated, we saw the release of the LG G Flex 2, the successor to the curved LG G Flex which made quite a buzz with it’s inception in 2013. The specs aren’t disappointing at all, as it houses a shrunk 5.5 inch full HD OLED display as compared to a 6 inch display of its predecessor. It is powered by Qualcomm’s latest 64-bit Snapdragon 810 chip with 3 GB RAM, 32 gigs internal storage, and a 3,000 mAh Li-Po battery. The optics are decent here with a 13-MP OIS-enhanced back camera. Along with a better curved and streamlined body, the trademark ‘self healing’ back has been improved with healing times slashed from 3 minutes to mere 10 seconds. Call it a technical wit or a simple Chemical genius, this ability grabs our attention.

The world has been awaiting the release of the successor of our beloved, One M8. Sadly, it didn’t happen yesterday. Instead, the Taiwanese OEM played it simple with the launch of another entry-level smartphone, the Desire 320. Following the footsteps of the Desire 310, the specs have been slightly bumped up. It hosts four processor cores each clocked at 1.3 GHz. Obviously, it runs on Android 4.4.4 KitKat topped with HTCs proprietary Blinkfeed. It also has a 5-MP rear camera with a 4.5 inch display. The price is yet to be revealed. Although, undoubtedly, it’ll be launched under a cheaper bracket.

“Marrying super-fast processing with premium HTC features in a compact form, the HTC Desire 320 delivers a quality experience for the budget conscious well beyond its entry-level model status.Following on from the success of the HTC Desire 310, it boasts enhanced power and memory to enable more people to benefit from a quality smartphone experience that delivers the perfect balance between smart essentials and value.”

How right he is, remains to be seen. Hopefully, we should see the release of rumoured M9 in near future, at CES ’15.

Asus Zenfone made serious buzz in the past. As expected we saw the release of the Zenfone 2 and the zenfone Zoom. Both of these will be running on the latest iteration of Android, Lollipop. They both also boast of a 5.5 inch full HD display, a 3,000 mAh battery powering a quad-core 64-bit Intel Atom processor. Both have decent optics. However, Zoom has a few tricks up its sleeves. It comes bundled with a 10-element lens along with a majestic 3X Optical zoom and Optical Image Stabilization.

Also released were the transformer Book Chi ‘hybrid’ devices (T300, the T100 and the T90). The former has been touted as a competitor to Apple’s Macbook Air, even if it’s surprisingly affordable. Well played Asus.

Panasonic plays it big too, this time. The devices unveiled were, what the firm claims to be the first consumer models to support HDR video, the WX970 and V870. They do so with the help of BSI sensors to improve image quality in low light. They are capable of capturing 8-MP stills and 4K video recordings.

More so, it also announced its 2015 range of smart TVs that will run on Mozilla’s Firefox OS. These will hit the shelves by this year end.

Lenovo is trying to keep a low profile this year, as yet. Famous for its Yoga line of devices, this Chinese firm takes it a step further with the launch of the Yoga 3 multi-form PC. True to its name, both, the 11-inch and the 14-inch models, can be twisted into four modes (tablet, laptop, tent and stand). It also announced the Xtension Selfie Flash, which aims at making our selfies better, or, less bad. However, this cool accessory might give us compatibility issues as it’s limited to be compatible only with VIBE X2 Pro as of now.

Known for its beautiful monitors, HP spices the desktop market in every way possible. It unleashed four brand new monitors, the (5K, 27-inches), Z24s and Z27s (4K at 23.8-inches and 27-inches) and lastly, a 34-inch desktop with resolution slightly lower than 4K.

Nvidia already powers many Android flagship entries with its 64-bit chips. Just as it couldn’t get any better, it announces the Tegra X1 and the Drive CX. The X1 has been hailed as the first ‘mobile super chip’. It is promised to deliver extraordinary levels of efficiency, without compromising power. However, its application isn’t limited to mobile devices. It will also be the heart chip of the Drive CX system, which will supposedly serve as the digital cockpit of cars in future.

Apart from the above mentioned, many other OEMs played a part on this press day. Nest is establishing partnerships with many companies,including LG. It wants each home technology to be interlinked and controllable from one single mobile interface. Netatmo comes armed this time with it’s futuristic ‘Welcome’ security camera, with live face recognition technology. Seagate’s ‘Seven’ portable hard drive (500 GB) is unashamedly hot, being only 6.9 mm thick and weighing less than a 100 g. Garmin brings four new wearables to cater the needs of different use types. Monster unveiled the waterproof Superstar Backfloat, a speaker with astounding sound quality and powerful bass, yet which can float on it’s back!

Technology cannot get any niftier. This and lot more to come this CES 2015. Keep following for updates on what’s next under tech this CES, and do share your thoughts with us.