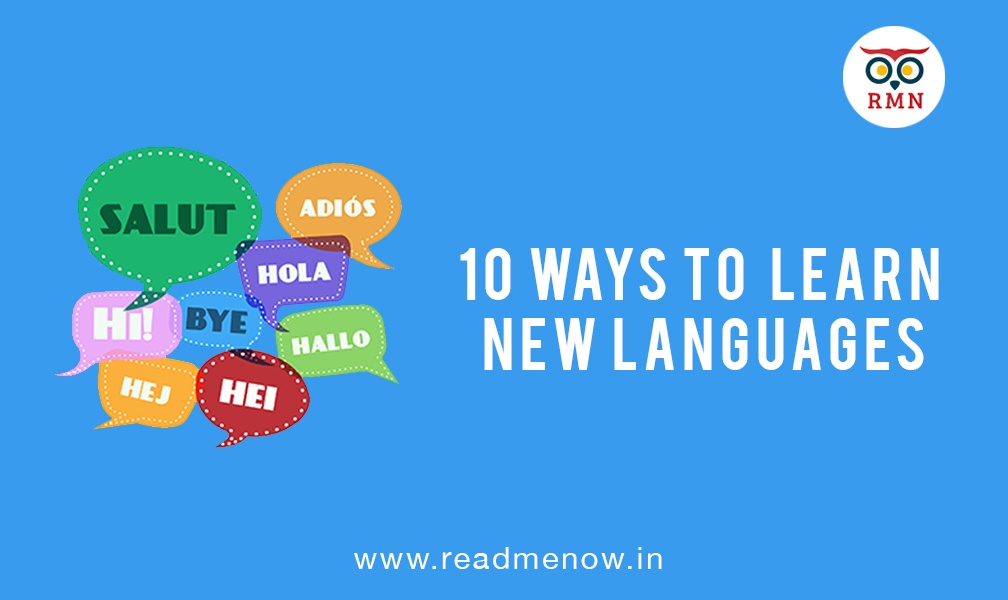 At some point in time, everyone has this urge to learn a new language. Learning new languages is fun. It makes you a lot more tolerant of different cultures. The basic ability to communicate with anyone in their native language is heartfelt. In most of the places, the locals will appreciate your efforts when you learn about their cultures and habits. So here I am listing top 10 ways to Learn Languages Faster.

Do you want to learn languages faster? Then ask yourself this question, “Why do I want to learn that language?”Are you looking to get a job in a new place which speaks a different tongue or you want to impress that French girl in your class? No matter how bizarre your reason is, just stick to it. Having a clear motive will help you stay motivated in the long run.

Let’s get one thing straight. You are not the only one who wants to learn that new language. Ask your friends or siblings who might have a similar interest in learning that language. Partner up with them and update each other. Once you start getting comfortable, start conversing with each other. Eventually, you will end up getting better by pointing out each other’s mistakes and getting jealous if your partner does better than you. Your partner can also be someone who speaks that language fluently. Fire up your Facebook or Twitter to find someone who speaks that language and start troubling them.

Oh, aren’t you a fan of those action-packed regional movies? Memorizing words is not enough. Watch movies and TV shows that are in the language you are learning and you’ll end up learning a thing about pronunciation, tonality, and emotions. I agree that it might sound a little daunting and meaningless at first but eventually, you will sink in. In such a case, let the subtitles help you!

If you love reading those small articles or listicles that appear in your news feed, then subscribing to native blogs and websites is a great option. It is a great exercise to try and translate the title and description of the vernacular articles. Pat yourself when you get that translation correct.

If you probably haven’t realized, there’s an app for everything now. Apps like Duolingo and Babbel, to name a few, can help you speed up your language learning faster. I remember that time when I was learning Spanish on Duolingo. The application is so interactive that it would remind me every day at a particular time. I would eventually end up spending some time on the app itself. Moreover, these apps come with reward points and daily streaks. The points you earn will help you unlock new things. The best part about Duolingo is that it is free.

The concept of flash cards shouldn’t be foreign to you as the language you are learning. Flashcards have helped a lot of students all over the world memorize stuff. Get your sticky notes out, prepare your flash cards and stick it wherever you spend a lot of time. Even better, there are now apps for Flashcards that you can use to memorize the vocabulary.

Immerse in the Culture

Once you start getting interested in the culture and invest your time in learning more about that language and the countries, you will also end up knowing interesting stories. Imagine traveling to a foreign place and enjoying the privilege of being a local. How does that sound to you? This will also help you to stay and feel safe in that particular place.

Travel to the Native Countries

This might sound a little expensive to you but traveling to one of the native countries would be a great option. Look out for cheap flights, book that hostel and leave. A lot of backpackers, travel the world on a minimum budget per day and still end up learning a lot about the language, culture, etc

Now that you have already made up your mind to travel to that country, don’t be that tourist who would spend just a night in one country just to see the Big Ben or the Burj Khalifa. Pick a place, wander the streets, talk to strangers. In most of the places, people would appreciate your effort to learn their local language. Sure, you might say something wrong or look stupid but don’t let that discourage you.

I know this point might sound like a lecture and that is the only reason it is the last point. Set proper goals and timelines or you’ll never learn that language you desperately want to learn.

How to Configure Zoho Mail in Apple Mail