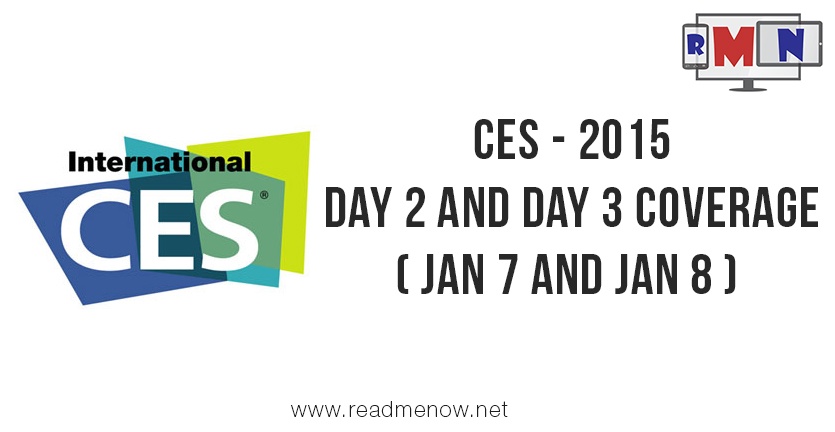 CES 2015 is on fire. We’ve seen quite many interesting tech announcements  previously (follow the links to know more – Press Day and Day 1). The next two days (Jan 7 and Jan 8) were no different. Let’s go through what made a buzz on the second and third day of Consumer Electronics Show 2015.

Smart home tech is gaining importance, as it is evident at CES this year. On the same line, August’s introduces it’s own version of a smart lock device, August Connect. What’s special here is that this particular device isn’t limited to our usual Bluetooth connections. Instead, it indulges the home security into our home Wi-Fi. This helps consumers have access to it, from anywhere online.

Keen has unveiled a floor vent that can open and close after studying your surroundings. That is, your habitats, time of the day, weather conditions and what room it’s in. This helps in boosting the energy efficiency, as it will control the temperature only as per the requirements.

Blackberry might just not be the name that comes to our minds when we think of security systems. The myth was broken this time. Sandeep Chennakeshu, president at the firm’s Technology Solutions, proposed the push of Blackberry loT platform to system security and its management. Given the success of Blackberry with secure device management, it will enable businesses to use the same to support loT devices and applications. Blackberry is combining prevalent technology from it’s QNX platform with it’s secure network to achieve this feat.

BMW showed off its prowess on day 1 of CES 2015. It didn’t stop there, and BMW is ready with another marvel for our luxury transport systems, laser headlights. BMW’s M4 Iconic Lights is a headlight concept that dynamically changes patterns as per the situation. One of the examples would be to create a dark area in the headlight so as to not blind the pedestrians. Another one would be generating a signal through headlights, to call a driver’s attention towards animals or other potential obstacles, as required. Pretty neat.

Harman International has come up with the ‘Independent Sound Zones’ technology. It aims at artificially creating an audio zone, one each for a seat in the vehicle. This will be helpful when the rear-seated passengers are watching a movie and the front-seated are listening to music, with minimal voice bleed.

LG also made quite a buzz previously on day 1 with it’s G Flex 2. LG is never behind when it comes to breakthroughs in mobile technology. This time, LG aims at rivalling Samsung’s galaxy Note Edge with it’s LG Display concept phone. Astonishingly, this concept phone is curved on both the edges of the screen. You heard it right, both edges curved. Good luck Samsung!

BlackBerry unveiled a slightly redesigned version of its Passport smartphone, for the AT&T model. The only noticeable change in the smartphone was round edges. Also, BlackBerry slashed down the price of its BlackBerry Classic to $50.

Dell is taking time to rethink its plan strategies, which is probably good. It was seen unveiling the new Venue 8 7000 tablet this CES. Apart from being a display marvel, it packs decent, if not the best of hardware. It boasts of an 8.4-inch edge-to-edge display. We have an 8-MP rear shooter and the device is powered by 2.3 GHz Intel Atom processor. This Android beast will come in at a price of around $399.

If wearable tech wasn’t enough to track our sleep habits, HugOne’s Family Sleep Monitor is here. ‘Sevenhugs’, as the name is, aims at tracking the sleep habits of the whole family. It syncs up with individual ‘Minihugs’ placed on each members nightstand and records critical sleep data, and monitor the patterns. This can be a boon for parents interested in a deeper understanding of their children’s sleep habits.

Laptops have evolved in every manner keeping the gaming industry in mind. MSI GT80 Titan SLI is yet another entry in this sector. What’s special here is the embedment of a full-on mechanical keyboard within a laptop! This gives a sigh of relief to gamers who are picky about their keystrokes. This way, they won’t have to carry an external mechanical board along with their machines. What does ‘not’ give us a sigh of relief, is its starting price of $3,299. Ouch.

That is, not to be harsh, only the tip of the iceberg. Only a few highlights that matter could be covered here as there’s a plethora of new releases going on out there. You think we missed something that matters? What are your thoughts on the new tech announcements happening at CES this year? Feel free to express yourselves in the comments section below. Stay tuned for more updates on this year’s CES and otherwise everything tech.